Seniors: What's next for you?  Have a job? Going to grad school?  Still looking? Let us know by May 15th, and get entered into a drawing for UMass apparel from the University Store. 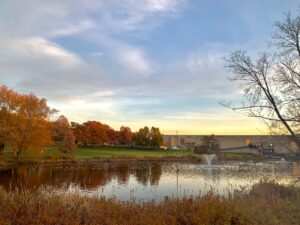 I like to plan and make lists. Daily lists, monthly lists, everything was planned to a T, and I had a fabulous five year plan after senior high school; Graduate, move to South Africa for university and study law, get an apartment and be free. This is exactly how I had written it down in my planner, but my mother had other plans of sending my sister and I to the United States, which she called a “golden opportunity to do better in life”.  I was so upset because my goals were destroyed and I was supposed to immediately adjust to a life that I hadn’t planned for. One minute I was at the airport hugging my mother, and the next thing I was standing at the front desk of the administration office of a community college with demeaning glares from the office assistant when I couldn’t respond to a question. The family I lived with didn’t make it easier with similar glares and which elevated to plain hostility in an argument one day, when I was told to go back to where I came from. In that instant, I wanted to fight but I knew better. I took in a heavy deep breath, went down to pack my things and left with my sister. I told myself that I was not going ‘back to where I came from’ until I made the decision to do so. I came here for school and I was going to do that. I didn’t know where to start from but I knew I wanted to go to university that year even though I was told to go back to high school because I hadn’t taken the SATs. It was very confusing and discouraging but all that time, my sister and I didn’t stop praying. In fact, the prayer increased. When I started community college, I made a new 5 year plan and entered the Commonwealth Commitment Program which allowed for students to complete their degree within 2.5 years and transfer to a four-year institution with 10% off tuition. I also worked hard to find scholarships from community organizations. Within 2 years I completed my associate’s degree and transferred to UMass Amherst. Everyday of my first week, I had to pinch myself because it was so hard to believe. I knew I had to make the most of every opportunity just like at community college. So when the Academic Fellows Program called, I had to answer and that’s how later went for an event and received a laptop through their annual chromebook giveaway. Fast forward to two years later, and I’m currently an AFP diversity fellow, a member of the Honors College and I will be graduating in this May with a degree in Political Science. People always say, “Don’t be afraid to start over/ take risks”. I say, “No, be scared. Be scared to let go of everything or everyone you’re familiar with. Be scared because you’re human. Just don’t let the fear stop you from moving forward”. And to dem squad wey dem dey figa say dem bigga pass we immigrants, just chok for der cos we go show you say Baba God dey for wanna back.