President Marzouki served as the third president of Tunisia from 2011 to 2014, and its first democratically-elected President. A physician, human rights activist, and politician, he embarked on a mission to “open the doors” of the presidential palace in Tunis through efforts to strengthen transparency participatory democracy, and by encouraging a safe public space for civil organizations to flourish. During his tenure as president, Marzouki was a “voice of social and revolutionary activism,” where he called for the strengthening of civil rights in Tunisia and also worked to curtail the unilateral powers of the country’s security services.

You are all invited to a public lecture in the Old Chapel from 6 – 7:30 PM, Tuesday, November 15. The topic of his talk will be the problems of democratic transition and the present prospects for democracy in the Arab world. 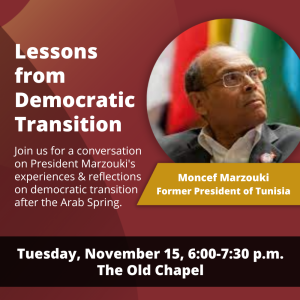